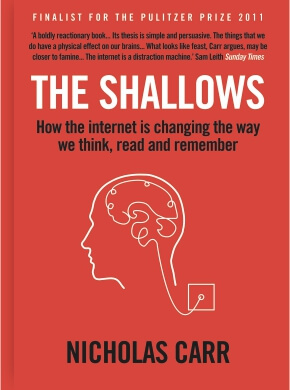 I am not a digital native; grew up in India in the 1990s—a time when knowledge was mostly consumed through physical books. Though there were a few educational programmes on Doordarshan, it was largely books that provided information. As I moved into the digital era, my first resort to finding quick answers to questions—before I knew it—was Google, not books! Searching for trivia was not just a one-off thing, it became a habit.

Today, we live in an age where it’s not just the computer that is connected to a network of computers (internet); our phones, watches, multiple appliances are constantly connected to the internet. It has become omnipresent, and it is almost impossible to stay away from the grip of the web.

This year internet celebrated its thirtieth anniversary. Arguably no other technological revolution has had such an impact on the human brain. That’s exactly what American writer Nicolas Carr wants to capture in this book—The Shallows—the effect of the internet on our brains.

I heard about this book a couple of years back by a pastor friend who still refuses to use a smartphone. With computers and internet changing the way we do things, we have become an attention-deficient generation. Our brain is being rewired even without our knowledge. It’s becoming increasingly difficult to focus on a single task for long hours (which, interestingly, Cal Newport, a professor at George Town University, calls “deep work”). Cal says that the ability to do deep work is going to differentiate the people who produce excellent work from those who do mediocre work.

Though a lot is to be blamed to the ubiquity of the internet, there are ways to deal with its excesses. I was sharing it with my brother who lives in the U.S how distracted I get during work. He said it was not something unique to me but that he was going through the same problem and suggested that I used Pomodoro timer.

The Shallows shows how we have come to become such shallow workers. Carr’s book is a clarion call to us Christians to “redeem our time” and focus on deep work. It cautions the readers about how their cyber habits are changing them—how they may be living a shallow or superficial life rather than a thorough life. Yes, deep work is what we lack. This lack of reading and focused attention has also been confirmed by Christian authors like Randy Alcorn and Philip Yancey.

Citing how we live in a world which is different from what it was ten years ago, Nicholas Carr gives evidence of how internet has changed our thinking, especially our brain neurons. He goes into depth about the various technological revolutions in the past, such as the use of alphabet by the Greek, the printing press by Gutenberg before talking about the modern digital revolution.

Carr claims that our brains are being rewired as never before. The books tell how machines are becoming smarter than us. Stanley Kubrick’s epic science fiction movie 2001: A Space Odyssey made way back in 1968 is becoming uncannily true. The computer revolution has come a long way from a standalone computer to a networked one. The way we remember and socialise has changed drastically.

Binoy Chacko Author
Binoy Chacko holds BE in Electronics and Communication Engineering and MA from SAIACS. He also helps out with MA Online Leadership Program at SAIACS.

By his own admission, this book is written by someone who “doesn’t do rest” and he calls himself…

Finding Hope Where There is None