A Guide to What Should Not Be Done 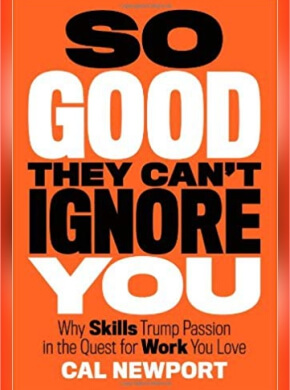 The title, So Good They Can’t Ignore You, itself is hard to ignore by a reader. This book by Cal Newport, a young Georgetown University computer professor, overturns the popular wisdom. His primary thesis is that the Western idea of pursuing one’s passion for a career is skewed. Newport’s premise goes against the well-accepted ideas in other self-help books by career counsellors such as Richard Bolles whose What Color is Your Parachute has been a staple for job hunters and career gurus alike.

Newport, however, is of the opinion that people should not follow their passion, but be good in a niche area of work by which they can build their “career capital”. This capital would give them control, in return. It is more of an idea that an ideal career does not exist; one needs to be cautious about stories that seem to popularise the idea that people have found their ideal fits when they left the nine-to-five cubicle culture.

The basis for Newport’s thesis is his interviews with select people who seem to be enjoying what they are doing. He narrates the story of Thomas, a Zen Buddhist enthusiast, whose quest to find the ideal job lead him down a path of dissatisfaction and frustration. To him this is an example of what should not be done. Later in the book, he narrates another version of Thomas who seems to get it right by being excellent at what he does and goes up the corporate ladder.

I wish Newport had quoted some solid research findings to base his thesis on rather than interviewing people and use only their life experiences to come to this understanding. The methodology that he uses raises questions. But the conclusion that he comes to is noteworthy—to persevere in a job and look for excellence rather than job-hopping, hoping to get that ‘perfect’ job!

One of the biggest disagreements I have with this book is that the writer uses the story of Steve Jobs—the co-founder of Apple Computers—to show that Steve was not pursuing his passion. While in Steve’s own words, in his Stanford University address, has said that he was following his heart and it did not make sense at that particular time. There is another story of Giles Bowkett, the designer of AI game Archaeopteryx, who had various jobs. His story, in fact, counters the writer’s thesis that people should not follow their passion. Speaking of Giles, he says, “His renown has allowed him to shift between many jobs, following his interest of the moment.” Though Newport does not use the word “passion”, he notes that Giles was following his “interest”.

However, the book does raise some legitimate questions about the existing paradigm of following one’s passion for a living.

Binoy Chacko Author
Binoy Chacko holds BE in Electronics and Communication Engineering and MA from SAIACS. He also helps out with MA Online Leadership Program at SAIACS.

The Deep Value of Spiritual Disciplines

My usual way with a new Christian book is to read it right through without pausing much. I…

This is an outstanding book that the reader will want to return to, again and again! Like John…

An Inspiring Book by a Contemporary Prophet

Vishal Mangalwadi establishes the Bible as the sole foundation of modern human civilisation, from which the followers of…